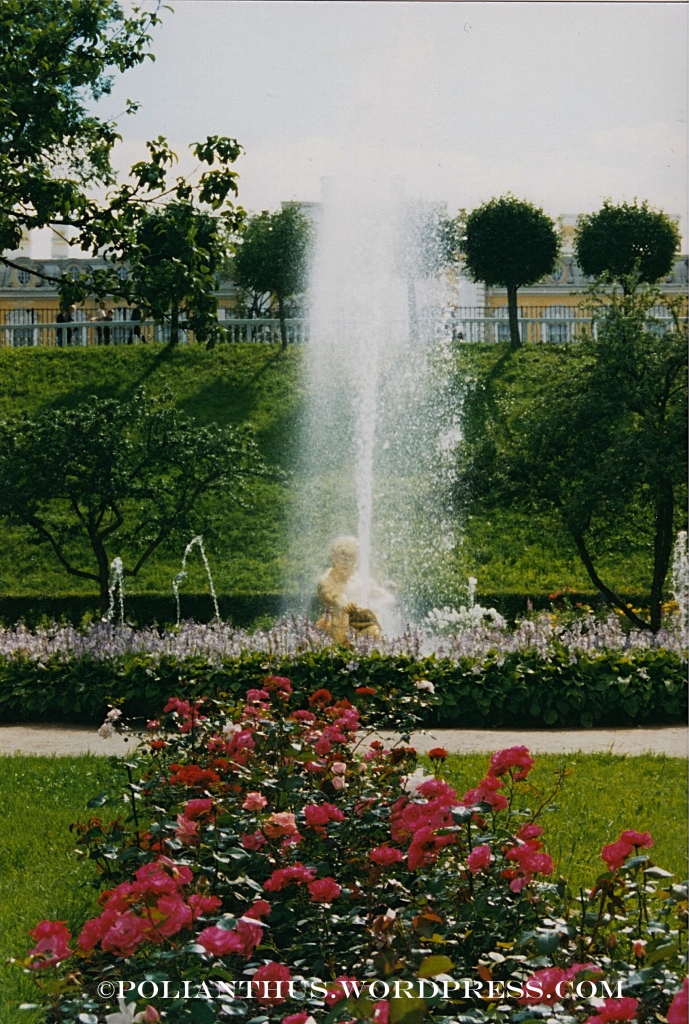 So here I am in week two of stately fountains. I mentioned last week that this was going to be a challenge for me too. After frantic searching through my cupboards I now know: 1) the majority of my photos are still in my parents’ basement 2) photos I have here are either in slide format or on CDS (which I cannot access not having a CD reader handy) 3) the photos I do have here, which might have been promising, include Portugal and a whole ginormous box  (found in the back of a cupboard) from a Transiberian trip through Russia, Mongolia and China. However, it appears fountains were not in focus back then, and they have not a single fountain on them.

However,  I did discover one photo, it’s a terrible one. Taken pre-digital with my old trusty Nikon, probably in 1998. Probably in St Petersburg, but maybe not. It’s hard to tell, although the buildings do look a bit like Peterhof in the background. I do remember that I spent a lot of time looking at art in St Petersburg and churches, and the inside of interesting restaurants, and being amazed at the ladies in the hotel, one on each floor, guarding the entrance to the corridors leading to the rooms and generally just watching the people. Trying to figure out where this photo was taken and typing in golden statues on wikipedia – I find sites and sites of information, all of them telling me that St Petersburg is famous for the Peterhof fountains . This photo somehow got separated from its siblings, it was mixed in with the Transib photos, but was taken a decade earlier (if it was in St Petersburg). So  voila I give you a photo, that I think is the Triton fountain at Peterhof.

I could be wrong. However, the background makes me think not. Because, the central statue has his hands on something and there are 4 water jets placed around him, and his head resembles this picture of the fountain, so I think that is what it is.

So you can see what is likely hidden behind the flowers, have a look at this photograph from Wikimedia courtesy of Photographer Ludvig 14,

Might I suggest you go to St Petersburg yourself one day, it’s a beautiful place. And perhaps send me a better photo of a fountain.

Despite my long explanation why you won’t find many stately fountains in Switzerland, Jude, managed to find one that sort of fits, it’s not typically stately, but as Jude says, it’s not a trough either…, Chava has a perfect submission and finally we get a submission from Versailles, more golden statues, and Kaz had a great one from Sydney.

Perhaps you have stately fountains galore to submit to the challenge, if that is the case, then please join in, you can find the guidelines below:

You don’t have to post on a Friday.  Any day in the month will do. If you have loads of pictures that fit into a theme, feel free to post several times during the month or create a gallery or whatever works best for you.