Above the Swiss version of a stately fountain ….

Some of the reasons I came up with, for the dearth of fountains, were, in no particular order the absence of the following factors:

In addition, I am going to generalise here, the Swiss are notorious for being serious and hard-working, they abhor frivolity in any form  and consider showing-off as a sign of bad taste and vulgarity.  And so building flashy fountains, would have been considered unnecessarily frivolous. Remember it’s a country of predominantly protestant persuasion.

In fact, living frugally, is admired very much. An example, one of the wealthiest families in Basel has a member who regularly serves drinks in a Jazz club she supports financially, she cleans the bar, she does all the regular tasks you would do if you worked there and if you don’t know who she was,  you would consider her a waitress like any other. She looks no different. Has no airs and graces. Bank managers learn early on that you cannot judge your  Swiss customer by the watch she wears or the style of her clothing, or you could be missing out on a very wealthy client.

Anyhow, after considering all this, I decided I need to revisit my definition of stately. For me stately is Versailles, but for Switzerland, I’d say the fountain in front of the Holsteinerhof in Basel is stately. However, after all my thoughts on the Swiss and stately fountains, it is interesting,  that the one fountain I deemed “stately enough”  is in fact in front of a home commissioned by a German..  A German noblewoman in fact. Augusta Maria von Schleswig-Holstein-Gottorf  the villa built in the 17th century while she and her husband were in Switzerland for a longer period of time (avoiding  a war back home). The house was sold on and  over the years it belonged to various families. It now belongs to the Basel University Hospital.  According to wikipedia, it  was planned to be demolished to make way for a parking lot (!!!!) some years ago, but luckily, some sane person thwarted these plans and the house is now under protection.

You can see the fountain is simple, but perfect for the small grounds and the house it was built to grace. 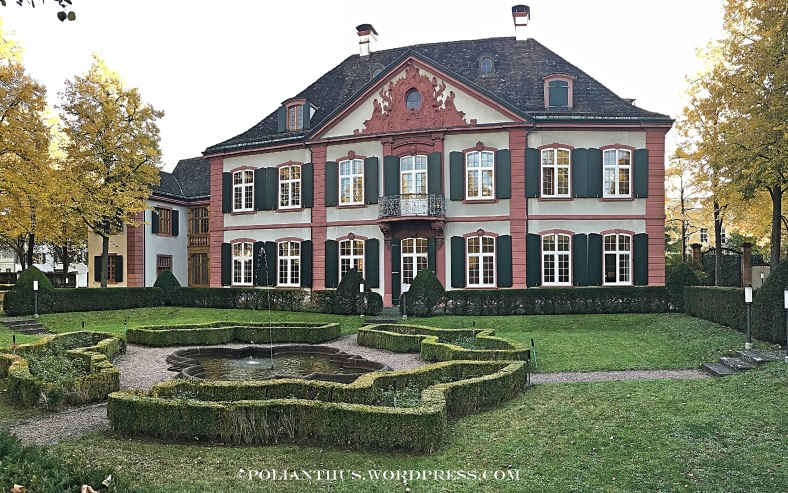 Want to join in?

Perhaps you have stately fountains galore to submit to the challenge, if that is the case, then please join in, you can find the guidelines below:

I shall post a fountain each Friday within a particular theme which will change each month. You are invited to join in by posting one or more of your own fountains within the month that fit into the theme and either add a link (ping-back) in your post to mine or link to it in a comment on my post. Or add he URL below this post 🙂 (Ian).

You don’t have to post on a Friday.  Any day in the month will do. If you have loads of pictures that fit into a theme, feel free to post several times during the month or create a gallery or whatever works best for you.

18 thoughts on “Fountain Challenge # 35 a stately fountain in Switzerland”